Based on the famous Echoplex guitar pedal. This tape delay effect was used by almost all of the most notable guitar players of the 60's and 70's eras.

The echo timing is tempo sync-able and can be switched from stereo to mono. Use the tone and variation knobs to achieve creative feedback echoes. The sustain knob increases the feedback for creating endless delay tails.

Turning the big Echo Time knob during playback or by using automation can cause some interesting tape-style effects that are popular in dub and experimental music.

- Echo Time : Changes the echo time from 0001 ms to 1000 ms.
- Tone : Determines the tone of the echoes.
- Variation : Emulates the slight variations of tape-based delay.
- Sustain : Increases the amount of feedback.
- Sync : Synchronizes the speed (rate) of the EchoFlex to your host BPM.
- Ping-Pong : Allows to switch from centered to ping-pong delay.
- Mix : Dry/Wet Mix of the plug-in.
- Out : Controls the output level of the plug-in. 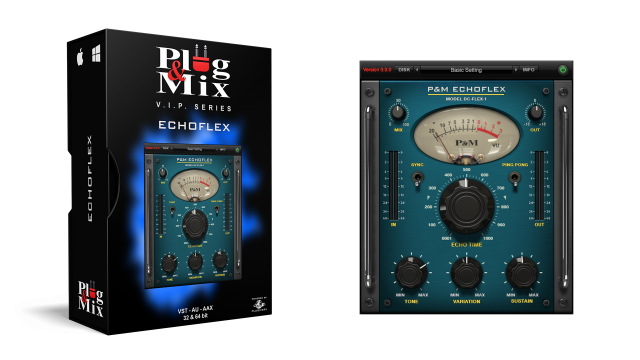