Great Promos for One Week Only !

Great Promos for One Week Only ! 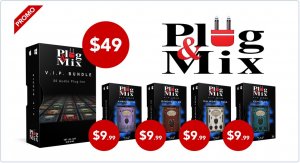 With a total 50 plug-ins included, this series delivers the same professional sound you would come to expect from other major plug-in manufacturers, but they are much easier to use. Designed with an emphasis on quality and simplicity, each plug-in has a clean interface with only the most essential knobs and switches.

With the V.I.P. plug-in series, dialing in a great sound has never been easier: Simply load the plug-in and turn a knob or two for instant sonic satisfaction.

Based on the famous Echoplex guitar pedal. This tape delay effect was used by almost all of the most notable guitar players of the 60's and 70's eras.

The echo timing is tempo sync-able and can be switched from stereo to mono. Use the tone and variation knobs to achieve creative feedback echoes. The sustain knob increases the feedback for creating endless delay tails.

Based on the famous Roland SDD320 - 'Dimension-D' released around the late 70's. This unit adds the highly sought after detuning effect heard on countless classic rock records and that continues to be used on modern club tracks.

Press one of the 3 Selector Knobs to Choose between 3 detuning modes and then adjust the overall strength of the effect with the big Detune knob. Use the In and Out knobs at the top to adjust the signal input and overall out.

See all promos here at the store
Latest News