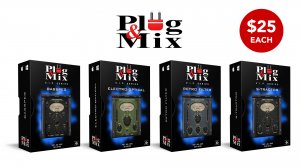 Basspeg is your new go to Bass Amp, built in parallel to the classic Ampeg SVT, it delivers deep lows and warmth to any Bass signal and is indeed very flexible with its parameters to easily contour and control your tone.

Electro Optical is a two channel electro-optical compressor/limiter designed for the utmost in transparency, detail and versatility.

Retro Filter is a retro low pass, band pass and high pass filters which add that special mojo to a track. This plug-in sounds great on guitars, bass or vocals - anywhere there is a need for creative tonal sculpting.

S-Tractor is your new de-esser; with just three parameters for quick and easy control of your vocal T’s, P’s, S's. Adjust the frequency, threshold and amount values to tame those harsh and nasal tones. Simple! 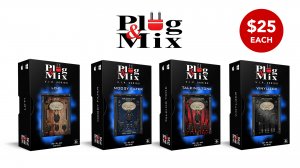 Moogy Filter is like bringing home a classic vintage filter pedal for use on all of your tracks. This plug-in’s great sounding filter can be driven with it’s built in saturation for crunchy tones and it also has an envelope follower to give that extra bite.

Talking Tone simulates the way voice formants are synthesized and will get your tracks "talking". You can achieve some very interesting and musical effects with a talk box, especially for classic vocoder sounds on the lead voice. This effects unit also sounds great on drums, guitars, and bass, adding an effect that really "communicates".

Vinylizer achieves the classic vinyl record sound and gives your tracks that old school flavor by adding a touch of noise dust and scratches to the mix. These analog artifacts will add life and warmth to your tracks, just like the old records from back in the days when your record-player had "soul". 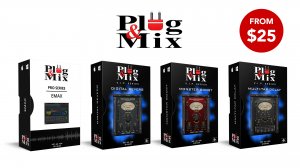 Digital Reverb is based on the Eventide Reverb 2016 and works especially well on drums. Choose between small, medium and large room size for convenient reverb effects sculpting.

E-Max is a professional Equalizer that is one of the most essential tools for any producer, mixing or mastering engineer. P&M E-Max Equalizer provides the highest quality tool for sculpting your sound with a stunning new interface for precise control.

Monster Boost is a signal booster that adds harmonics and warmth to your tracks. It has that magic coloration that can be used on everything, from Drums, to Vocals, to entire mixes. This is far from a transparent effect, rather it adds mojo and feel to any instrument or voice.

Multi-Tap Delay brings a new twist to delay plug-ins. Set your general rate with the big speed knob and then prepare yourself for Multi-tap madness as you can adjust the precise position and pan of all 5 delay taps. 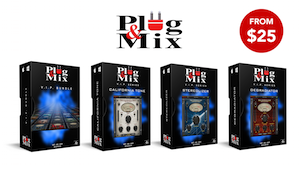 VIP Bundle is the entire collection of 50 Plug & Mix plug-ins… Get EQs, compressors, amp sounds and all kinds of effects for less than $1 each !

Degradiator provides three levels of bit crushing mayhem and a bandpass filter to achieve vintage radio telephone effects. This Bit Crusher style plug-in will mangle and degrade your sound to a whole new level. You can use it to dirty digital saturation to your tracks and create wild down-sampled textures.

Stereolizer provides a unique way to get the most width out of your stereo panning. Want to get that stereo synth pad to sound like its coming from outside your speaker placement, this is the plug-in to do it. 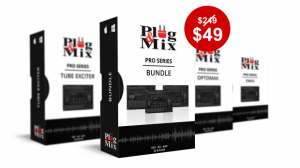 Studio Owner Jim Moreland has sent us this very positive message about his experiences using the Pro Series plug-ins.

"I’m kicking myself for not even bothering to demo the other two Pro Series plug-ins you came out with. Your EQ is the only EQ I’ve used on any mix in my mix bus over the last two months..."

The Tube Exciter was the first I tried out. “Wow” was the first thought I had. Then I thought - there has to be a downside to it. It couldn’t possibly be that easy to glue a mix together (I used it as the first plug-in in a mastering chain). Then the band showed up (alt country guys in their 20’s) and I asked them to sit for an A/B test. They had no idea what I was doing to the mix, they just wanted it to sound as good as possible. So I asked whether they preferred "A" or "B" ("A" being another company’s Harmonic Saturation Processor, a plug-in I’ve been using as a sort of summing mixer and “B” being the Tube Exciter filling the same role). Before I got to the third A/B instance, they stopped me and said "Isn’t it obvious, it’s B. B sounds much better". If there’s a better plug-in for this purpose, I’ve never heard it - at any price.

Then I tried the OptoMax. I initially found it a little too aggressive on a mix bus. Then I noticed the "Peak/RMS" button and hit that. And again, "Wow". What a beautiful, smooth, warm glue box that plug-in is. And that "Peak" mode sounds friggin’ awesome on a drum bus.

Thanks again for these plugs. I’m telling everyone that walks through my doors about them. And please make more Pro Series plug-ins. I’m buying whatever you’re selling.

The Plug & Mix Pro Series on promo at $49 until Monday, October 5th.